A huge plateau in the southeast of Venezuela forms the Gran Sabana region (Spanish: Gran Sabana – “Great Savannah”) – one of the least explored corners of the planet. In this heavenly place rise tepui – peculiar mountains in the form of truncated pyramids with ideally flat tops and steep slopes.

Tepui, or “table mountains”, stand isolated from each other, rising in inaccessible cliffs above the lush tropical jungle. The word “tepui” in the language of the Pemon Indians who inhabit the area means “House of the Gods”. Indeed, it is difficult to find a more suitable place for the gods to live, like these amazing mountains shrouded in fluffy clouds!

“Table” mountains are considered one of the most ancient

For centuries, tepui have attracted travelers, adventurers and explorers, many of whom have mysteriously disappeared without a trace. In the 19th century, before the invention of airplanes, traveling to this mysterious land was very risky.

Many places were officially recognized as inaccessible and blank spots remained on the maps for a long time. The discoverers, risking their lives, paved the way in this remote corner of South America, faced with many obstacles. However, the reward for the daredevils was magnificent, unsurpassed in beauty landscapes of luxurious pristine nature. 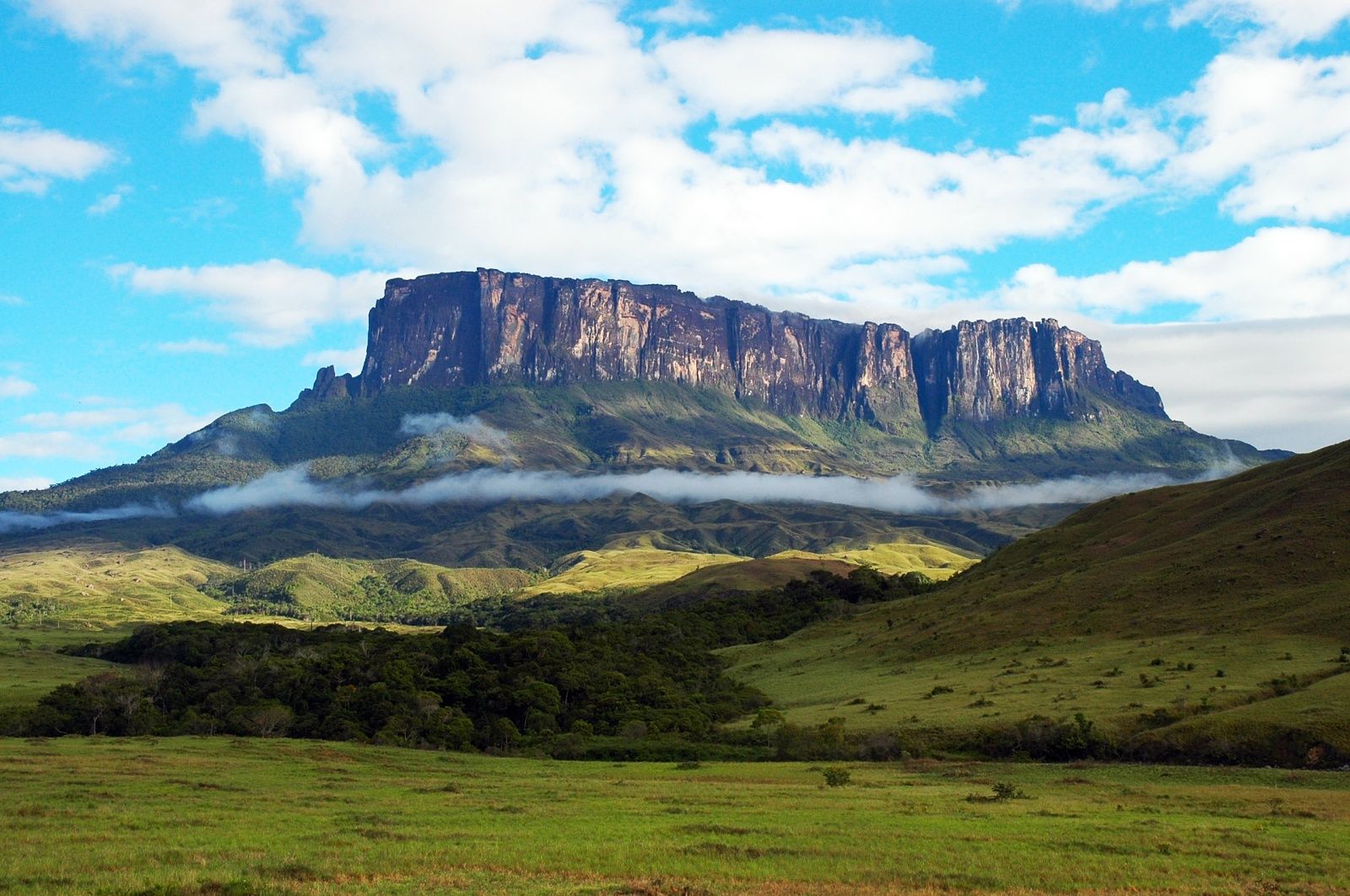 Flying on small planes allowed specialists to explore the peaks of tepui and find out a lot about the origin of these amazing creations of nature.

Tepui are the remnants of a vast plateau that once stretched from the Atlantic coast to the basins of the Amazon (Spanish: Amazonas), Orinoco (Spanish: Rio Orinoco) and Rio Negro (Spanish: Rio Negro) rivers. The plateau was formed about 200 million years ago on the site of a huge lake, when South America and Africa still formed a single continent.

The plateau, consisting of sandstone, was located on a granite base; over time, erosion turned the plateau into several hills, from which tepui formed, usually consisting of a monolithic block of Precambrian sandstone or quartzite.

Giant “tables” rise above the surrounding jungle to heights of more than 2 thousand meters. In total, there are 115 such mountains in the Gran Sabana region.

The flat peaks are completely isolated from the forest surrounding the mountains, which makes them truly “ecological islands” on which endemic species of flora and fauna have been preserved, developing for thousands of years in isolation from the rest of the world.

Auyantepui is the largest of the tepui, its height above sea level is almost 3 thousand m. The flat top of the mountain is a giant plateau with an area of ​​about 700 km2. This mountain is famous for the spectacular fall of the Angel Falls (Spanish: Salto Angel), the highest free-falling waterfall in the world (979 m) from its peak.

Due to the great height of the fall, the water, before reaching the surface of the earth, crumbles into tiny sparkling splashes, turning into a thick iridescent fog that envelops the surrounding area.

The mountain gained fame in 1933, when the American pilot James Angel (Spanish: James Crawford Angel; 1899 – 1956), flying around the area in search of gold in a small sports plane, accidentally discovered a gigantic waterfall of fantastic beauty, later named after the discoverer. On Latin American maps, the waterfall is often referred to as Salto Angel (Spanish: Salto Angel), that is, “Angel’s Jump”.

As in the lowlands that pass into the Guiana Highlands, Tepui has dry and rainy seasons. The climate is significantly affected by altitude, so, at the highest Tepuy, the temperature sometimes drops to 0 ° C. But usually the average temperatures on the flat tops range from +8°C to +20°C, depending on the height above sea level.

65% of the vast territory of the park is occupied by Tepui, which rise above the jungle with rocks of various sizes, standing at a distance from each other.

In addition to the majestic mesas, picturesquely hung with seething waterfalls, on the territory of the natural reserve you can see rare representatives of the flora and fauna that are found exclusively in this region.

The plateaus of the table mountains are completely isolated from the jungle thickets at the foot, which makes the highlands “ecological islands” on which many endemic representatives of flora and fauna have been preserved, developing for thousands of years in conditions of complete isolation.

For example, carnivorous plants that lure insects into their beautiful fragrant traps. The slopes of the mountains, surrounded by fluffy clouds, are covered with exquisite bromeliads (lat. Bromelia; a genus of plants growing in the tropical regions of South America) and delicate orchids.

A land full of mysteries

Tepui is actually the only place on the planet where no human foot has set foot. People have visited only some Tepui, most of the mesas are completely unexplored to this day.

Therefore, unusual mountains become a source of legends, beliefs, mystical stories, as well as an inspiration for artists and science fiction writers. The local lands are densely shrouded in a halo of secrets and mysteries, which are told not only by age-old legends, but also by reports of exploratory expeditions.

The last official major expedition to these parts, namely to Roraima, was undertaken in 1965 by the son of Juan Angel (Spanish: Juan Pablo Angel Arango), the discoverer of the famous waterfall, named after the Venezuelan pilot.